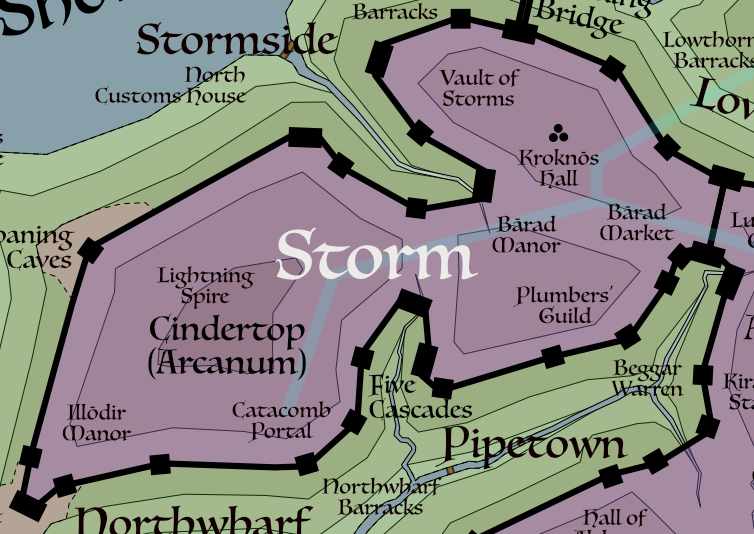 The Storm is named for Kāalva's sword, the Sword of Storms. The western-most point in the city, the Fortified District rises high above the Shore of Clubs, named for the seals and other sea mammals that used to congregate along its rocky shores. Nearly half of the Storm sits upon a peninsula, bounded by the Teeth of Kāalva', the Quartz Claw, and seaside Moaning Caves. The District is connected by one bridge: The Quaking Bridge (to Wail), and shares a portion of District wall with the Final, the only such shared border within the city.

Most folk enter the Storm through the merchant tunnels that connect Bārad Market with the Foothold of Stormside below. Access to the tunnels is well-guarded by agents working with the North Customs House.

There was a time when visiting ships would hang their nations' flags from the imposing walls of Storm so that other vessels approaching Grimthorn could see which ships were docked along the wharves, rivers, and lake. This tradition is no longer followed, as the animosity and trading competition between the Districts is too great.

The Arcanum and Lightning Spire

Built into the scorched summit of Cindertop is the world renowned magic academy known as the Arcanum. For centuries, hopeful young adepts traveled to Grimthorn to peel back the mysteries of Arcane and Occult traditions. Many of the most powerful and famous wizards of these traditions walked the endless warrens of the Arcanum, studied in the cavernous libraries, and developed their disciplines in the notorious Oubliettes. After The Fissure however, the Arcanum no longer sat at a Ley crossroads. This phenomenon made it easier for fledgling wizards to tap into the Tapestry, the nearest Stitch however is located near the ruins of Wizard's Watch, south of the city. The Arcanum still has extensive libraries and resources, but is no longer a magnet for young adepts.

Cindertop is mounted by a large metal tower called the Lightning Spire. Its construction is believed to be related to the second destruction of the Burning Bridge. The structure seems to draw lightning from the sky during storms and sometimes when there are no clouds. The attendant cracks of thunder are commonplace and rarely noticed in the surrounding city. Though the spire is assumed to be a tool of the Arcanum, over which it's placed, the true purpose of the spire is unknown. What is known is that since its erection, lightning has not struck one house, building, or tree within the Fortified Districts. Occasionally, particularly strong bolts of lightning jump from the spire to the Quartz Claw, but the reason is unknown. The quartz formation does not appear damaged by the arcs but it does retain an inner glow for hours afterward.

Despite having an unbroken claim to rulership, House Maress has not always held dominion over multiple Districts. Before Queen Sēlatha's grandfather King Arethn I swept into the Storm, the district had been held by another ruling family, House Bārad. Queen Fāma V, old and wasting in her bedchambers at Bārad Manor, sent for her life-long confidante King Arethn to discuss plans for her succession, and how best to position and protect her adult children from antagonists. King Arethn convinced her to place her children in a safehouse until all was settled. As the Queen's health took a turn, her children said their good-byes and were removed to the waiting safehouse. As they were murdered by King Arethn's soldiers, the Maress Army stormed across the Quaking Bridge, seizing key points within the District before the Queen was even dead. It is believed that the remains of Queen Fāma's children were flushed into Pipetown.

For decades, Bārad Manor was left as it had been the day Queen Fāma was betrayed. Without attendants, the Queen soon perished in her bed where she remained for years to come. Even after all treasures were removed from the manor, people still came to pay their respects to the corpse of Queen Fāma, still draped in all the silk finery of a royal bedchamber. Sēlatha was disgusted by this tradition and the stain on her House. On Sēlatha III's coronation she ordered the Bārad queen's body removed to the family crypt beneath the manor.

Named for the previous ruling House of Storm, Bārad Market is one of the more thriving markets of the Fortified Districts, attracting nearly all imports along the Shore of Clubs. The market is guarded by the ever-watchful yellow robed Eight Paths monks from Wail. They do not interfere unless there is trouble and rarely speak to those outside the Academy. Their presence within the market, and elsewhere in the District, is a direct result of Queen Sēlatha's vision for quiet, non-lethal, rule. An elder monk is always present in a bright yellow tent at the market's center to adjudicate disagreements within the marketplace.

A series of waterfalls and springs that tumble from below the south wall of the Storm, emptying into a creek, downstream from the noisome Pipetown. The stream is significant, as it provides the only drinkable water for all of Pipetown, Northwharf and North Bayside (of Final). The Five Cascades are so important that guards regular monitor the comings and goings of fetching cityfolk.

Once a stately residence, Illōdir Manor has seen years of eccentric decline. Illōdir is no longer the home of a noble family. The scion of that House was Aridimus Illōdir, an astrologer of great renown, but had no children to continue the great House. During his lifetime, Aridimus invited other scientists and scholars to live under his roof, creating an academic community of sorts. Upon his death, he established the Illōdir Trust to support scientific research and provide them apartments within Illōdir Manor.

Today, the old manor house looks haphazard and ill-maintained. Wooden sheds have been constructed on old balconies and a veritable town of interconnected huts adorn the roofline. Most striking is the mammoth telescope mounted on the northern tower, encircled by a scrap-wood structure that contains one of the most extensive and bizarre laboratories in Grimthorn. The telescope is occasionally used by members of the Hall of Astronomers (in Wail), for a fee. Members of the Illōdir Trust vote to accept new members when one dies or is excommunicated for scientific blasphemies. The democratic Trust has taken an unforeseen direction however, and has steered toward more and more outlandish researchers.

A large iron bell hangs ensconced within the south wall of the District, not far from the Quartz Claw outcropping. When the Iron Bell tolls, people through the city scramble away from the water's edge. Those that remain face the wrath of the Chaos horror Exis. Tentacles of every size writhe from the waters, snatching people from the piers, ships, and wharves. Some of these can reach hundreds of feet down avenues and into unshuttered dockside windows. The natives of Grimthorn have learned to take these attacks in stride, retreating to strong-houses and other chambers until the Iron Bell stops ringing. Visitors however are often left hesitating for a few seconds too long.

The purpose of Kroknōs Hall is unclear. Some suggest that it is an old residence, while others believe it to be a tomb. While much of the original building has fallen into ruin, the central structure is surprisingly intact, almost as if it and its contents were engineered to weather the centuries. The section is filled with faded paintings and statuary depicting heroic exploits of a single swordsman. The largest of these hangs over the wide mantle of an oversized faux fireplace, depicting a unclothed bearded man lounging lasciviously on bear rugs, holding a broad-bladed sword strategically along the length of his hirsute muscular form. Each painting and statue is labeled with the Kroknōs name followed by a unique epithet, e.g., the Brave, the Bold, the Masculine, the Conqueror, the Insatiable. The problem with Kroknōs Hall is that no one, historians included, can figure out who the man was. The Hall's remnants are treated as a museum, with guards, staff, and interpreters, as it is a popular destination for seamen and warriors of specific predilections.

Like most guilds, the Plumbers' Guild is a relic of a more united time within Grimthorn. When exactly that time was, is debated. Guilders have inherent permission to travel form District to District when engaged in sanctioned work of their Guild. This freedom extends to underground operations which are normally off-limits for obvious security reasons. Because most of the Districts' sewers run beneath the high streets and alleys, the piping layers are often crawling with guilders equipped with well-worn and secret byzantine maps handed down through the centuries. These maps are very valuable and their accounting and protection is of the utmost importance. Should even one map fall into the wrong hands, the security of the entire city could be compromised. For similar reasons, Plumbing maps do not chart passages beneath the sewers.

The location of the Vault of Storms is known to many, but it is not common knowledge. For many years, first year students of the Arcanum were challenged to find the vault door before they could advance to their second tier. Those that could not find the vault were mercilessly harassed, many into withdrawing from the school altogether. With the absence of new students, the only Arcanists that know the location are those that succeeded the challenge as students. With each passing year that number dwindles.

The Legend of Kāalva holds that her son placed Stormcaller into the vault for safekeeping, until it was again needed in the defense of Grimthorn.