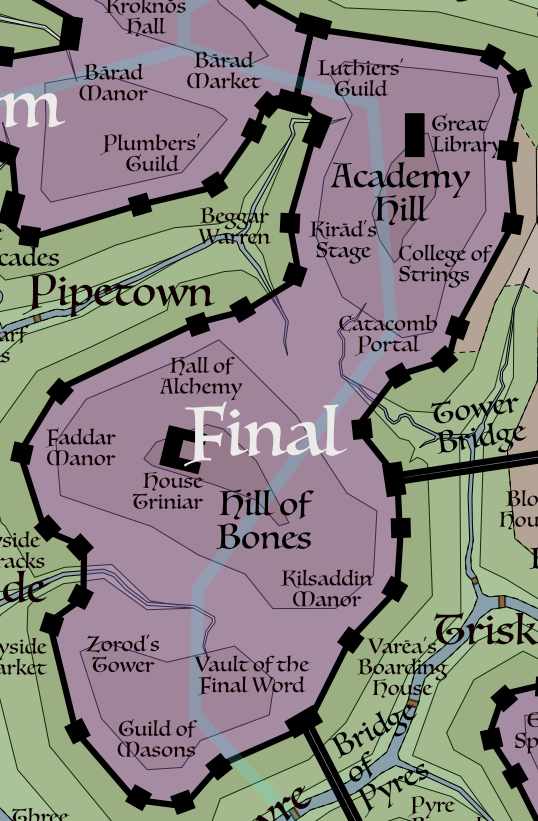 The Final District is named for Kāalva's sword, the Final Word. In some respects, the Final represents the best and worst aspects of the City of Grimthorn. Within its fortifications, lies the ivory towered Academy Hill to the north and the malignant Bone Hill to the south. The District can be accessed by the Bārad Gatehouse (to Storm); two bridges: Tower Bridge (to Grimthorn) and the Bridge of Pyres (to Char); the Pipetown Gateouse (to Beggar Warren), Kilsaddin Gatehouse (to Trisk), and numerous other less well-known ingresses.

Though most find the Hill King repulsive and monstrous, those in positions of importance recognize him as an enthusiastic and generous patron of learning and the arts. It is no wonder that Academy Hill, the Great Library, the Luthiers's Guild, the College of Strings, Kirād's Stage, and the Hall of Alchemy all thrive under his rule. Many have wondered how the Hill King can afford such generous bestowals, but the answer is apparent to anyone that travels the streets of Final or walks the ancient walls. King Lōth employs no soldiers or guards to protect his domain. In their stead, he has unnatural sway over an army of lycanthropes and vermin, which worship and serve him like an earthbound god.

Similar to most buildings of Academy Hill, the College of Strings is a stone and stained glass hall surrounded by a planted margin of walled greenery. Despite the name, the college is open to student musicians and bards of every musical tradition. The only requirement for admission is that the applicant be good---very, very good. In times passed, graduates of the College of Strings would be welcomed on any stage or before any court. Though most of the buildings are comprised of residences and practice rooms, there are a small number of wood paneled exhibition halls configured for small performances, orchestra, and opera. These spaces are typically not open to the public. Students are encouraged to play at venues throughout the City on their own time to assist with their tuition and expenses. For this reason, music performances throughout the City are usually of high quality.

Allāah Faddar has been an old woman for as long as most remember. A few locals with gray beards and poor hearing recall a time when she was called Lady Faddar, the wife of a chirurgeon that served most of northern Grimthorn. Doctor Faddar and his wife-assistant traveled many Districts tending to the sick and injured. When her husband died, Lady Faddar carried on his works for those that showed-up at her door. She is not be the most skilled doctor in Grimthorn, but she has decades of experience, stitches wounds with a deftness that belies her gnarled hands, and works for donations. She has a wardrobe of dresses, skirts, blouses, and aprons. Each and every one is stained with the exertions of her charity.

The grandest building in the Final is the Great Library of Grimthorn. The high stone and stained glass edifice is comprised of four separate libraries, one piled atop the next. The libraries are devoted to: Literature and Religion, Science and Mysteries, Art and Histories, and Foreign Studies. The lower stories of the great building are devoted to special collections, preservation, and the study catacombs where sponsored researchers of any school or patron may come and do research.

The Order of Masons is a closed fraternity of stoneworkers, quarrymen, sculptors, and architects whose professions are responsible for building and maintaining the eternal City of Grimthorn. The guild's craft secrets are especially valuable in preserving the great stone fortifications, manors, gatehouses, towers, and bridges that constitute the great and ancient city. Only the Plumber's Guild has greater access to the many Districts.

The Guild house is a large stonework building with heavy wood doors fitted with complex locks and wardings. This is one of the most well-secured buildings in all Grimthorn. Inside the building are extensive scroll libraries with plans for most of the city's major buildings and structures. The information on many of these scrolls are state secrets. Publicizing many of these papers is punishable by death. If the betrayal was perpetrated by a guilder, the Order of Masons has a time-honored punishment that it follows. It is widely understood that punishment by outside laws are preferable.

The school standing on this spot is not the original, nor is it the second or third. Constructed in the style of Academy Hill buildings, it is obvious that the Hall of Alchemy has undergone extensive repairs and new construction over the years. The boarded windows give it the appearance of abandonment, but that is deceptive. A nearby District wall also has evidence of reconstruction using stone from different quarries. The current Hall of Alchemy has now stood for over sixty years. No one is sure whether that is a record, because that is also the age of the oldest ledger in the Hall. It may be no surprise, that a fair percentage of inmates at House Triniar were once students of the Hall of Alchemy.

The king of Final does not live in a great manor or an ancient hall resplendent with statues, portraits, and treasures of a long and hallowed line of ancestors. Though his line is as long as most, King Lōth lives within the tangled burrows of the Hill of Bones as his parents and their parents did before them. His rodentia nature make him uncomfortable in large open areas that are not saturated with the comforting musk of his red-eyed kind. The walls of the Hill of Bones burrow are yellow with the bones of prey and enemies, the sediment from countless wars and ignoble compromise. Despite the condition of his home and court, King Lōth is a wily participant in the power struggles of Grimthorn.

The extent of the Hill of Bones complex cannot be understated. It reaches far beyond the confines of the artificial mound. Many have suggested that it extends into other Districts and perhaps into the forgotten halls of King Urgell's race. If all of King Lōth's holdings and influence were taken into account, the other Pentarchs might be redefined as tin crowns.

A derelict manor house perched atop the Hill of Bones, House Triniar was long ago converted into an asylum. The building is surrounded by a rusted iron fence that only contains those unwilling or unable to leave. On dark and quiet nights, muffled screams, shouting, and unearthly cries can be heard from within the heavy shutters and doors, which are closed and barred every dusk. The asylum is manned by followers of the 'charitable' Order of the Kraken. It is unclear who if anyone supports their cause, but no one questions their work for it keeps the insane off the streets of Grimthorn.

Here stands an attractive home in central Final. At night the windows are always aglow with inviting firelight, during the day they are cracked to allow faint wafts of baking breads and cakes. The great house has no residents except for a skeleton staff that keep the kitchen busy and the fires burning. Despite the wholesome allure of this place, there are rarely any visitors and passers-by ignore the open windows and ajar doors.

Kilsaddin Manor is perhaps the most notorious locale in the Final. Unlucky ambassadors come and go to the Hill of Bone, but no one visits the manor and leaves the same way they entered. Local rumor has it that Kilsaddin is home to an order of assassins. Anyone that enters is welcomed, treated to kingly hospitality, and then joined by a member of the order who discusses business followed by terms. If terms cannot be met, the visitor is never seen again. If terms are agreed upon the petitioner is moved to some other location in the City, by secret avenues, unharmed. Those who speak of what they encountered at the manor are marked for death. These are the unwritten rules of the unnamed order.

There are a number of theatrical stages throughout Grimthorn, but the most prestigious venue is Kirād's Stage in the Final. Playwrights, actors, and various entertainment troupes converge for nightly shows beneath the flame-spouting gargoyles that encircle the building's roof. The proprietor is Alvad Vadāis, a successful playwright with powerful patrons who enjoy being featured in positive lights. There is an obscured box along the theater's upper deck that is only accessible by tunnels branching upward from the basement. It is believed that King Lōth sometimes wends his way into the box, and enjoys performances concealed from the audiences.

One of the smallest Guild houses in Grimthorn belongs to the Luthiers's Guild. The building is little more than a small private bar attached to a handful of secret workshops where master luthiers work on creating and restoring prized instruments. There are other luthier shops in the City, but the masters congregate here to teach apprentices, collaborate, and carouse. Guild membership is never high, but is very close-knit and protective of its members and secrets. Valuable instruments cannot be lost, fenced, or destroyed without someone in the Guild learning of it.

Vault of the Final Word

Most of the sword vault locations are exclusive, hidden, or hard to reach. The Vault of the Final Word is not. A street level sign welcomes visitors with the image of a hand pointing to an open staircase leading into the District depths. Below, the vault door antechamber is circled with benches and tables where visitors can stop and take a breather before climbing the long steps back to the surface. The vault door is engraved with the outline of a sword that is composed of writhing spirits.

When the vault was discovered years ago, King Lōth's grandmother made an impassioned plea that should the fate of Grimthorn demand a defender, the vault door should be available to any that might have a chance of opening it. Shortly thereafter, the Guild of Masons were employed to make a permanent and welcoming entrance to the location.

In southern Final stands a tall, narrow tower that overlooks the District wall and the Foothold of Bayside to the west. The tower is built with hundreds of tiers of perfectly shaped stones, spiraling in one continuous course to the summit. Each stone is covered in strange weather-worn runes, dulled and pockmarked by the sea winds. The tower has no windows except at the very top and only one small door at its base. A human could enter the door on his hands and knees, if the painted door wasn't closed, locked, and barred.

The structure is known as Zorod's Tower, though no one outside the Arcanum remembers who Zorod was. A handful of apprentices have accepted their robes, grown old, and handed their robes on to another, since the death of Zorod. The majority of these sorcerers have been Gnomes, dedicated to the studies and revelations of Zorod the Unknown, an Illusionist of great power in that discipline. The stewards of the Tower do interact with their peers at Cindertop, though no one appears to ever enter or leave the Tower.