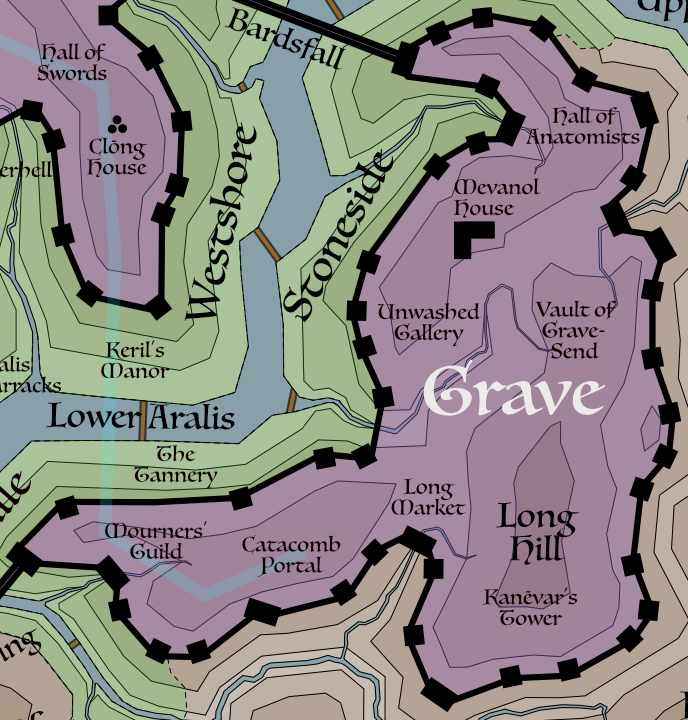 The Grave District is named for Kāalva's sword, Grave-Send. The southeastern District is dominated by Kanēvar's Tower atop Long Hill, now emblematic of King Hessen and his rule. The tower depicted with three swords running through it in parallel, one in reverse, is the heraldic device used by King Hessen's soldiers. Though the Grave has never been as affluent as the Char, King Hessen chooses to reside here. The choice may be strategic, as the Grave is only accessible by two bridges: Bardsfall (to Char) and the multi-tiered Widow's Crossing (to Soul).

The ivy covered Hall of Anatomists appears to have been lifted from Academy Hill (in the Final) and deposited in the northern corner of the Grave. The resemblance is not a mistake, as the hall was designed by the same architect some 500 years ago. The hall has served as a college for chirurgeons since its initial construction. Unclaimed bodies are routinely carted from Parapet Gallows (in the Char) to the hall for vivisection. The Hall includes a vast library of anatomical texts, devoted to all races, diseases, poisons, and other scientific disciplines. Students of the Hall of Anatomists wear distinctive, layered red robes with white sashes. Instructors wear elaborate silver necklaces and pectorals.

Kanēvar lived in Grimthorn during the 68th century. The wizard's story is known to historians and few others. Visitors to the Unwashed Gallery walk by his darkened portrait without bothering to rub the small brass plaque that bears his name. His tower however, rising 164 feet from the southern extent of Long Hill is recognized throughout the city, centuries after his death. The original purpose of Kanēvar's Tower is unclear. It is constructed with the steadfastness of a military keep, complete with battlements, arrow-slits, and hoardings rebuilt by the current occupant, King Hessen V. There are no similar buildings within the Fortified Districts, with the possible exception of Thorn Keep. Over the last several years, King Hessen V has busied himself and his servants with exploring the tower's interior, though there still remain many sections that are hidden or sealed with arcane forbiddances.

Once a thriving open market, the stone plaza is now used for military exercises for King Hessen V's soldiers. Much of the area is filled with neatly ordered rows of tents, flagpoles, and portable armories.

This ancient city estate is the ancestral home of House Morgorēan, birthplace of King Hessen V and his antecedents. The house passed from the Mevanol family many years ago. The building sprawls outward from the original mead-hall, which itself was rebuilt with stone walls and stained glass lancet windows centuries ago. The sides of the hall are lined with shields resting on the wooden thrones of each Mevanol and Morgorēan ruler. While King Hessen V no longer resides at Mevanol House, the place is maintained and staffed for diplomatic occasions and fêtes which would be much confined at Kanēvar's Tower. All preparations and House duties are overseen by the King's only sibling, his sister Enddi.

Near the east gatehouse to Widow's Crossing is a somber, monolithic building with large iron doors and brick smokestacks. The cobbles surrounding this strange location are worn into deep ruts, evidence from countless years of heavy wagons laden with grim cargo. The Mourners are not just chanters and wailers for hire; they also include the city's undertakers, morticians, gravediggers, and crematory workers. It is an industry that most tend to shun, until they're needed. The current Guildmaster is Ern Tōtun, a tall cadaverous man known for his quiet, impassive, commanding voice and the vertebral cane that he uses to walk.

In central Grave stands a crumbling building with a mix of stained glass and boarded windows. The marble steps lead to a pillared portico that was impressive, in its day, and three pairs of bronze doors bearing reliefs of the life of Kāalva Swordweaver. A handful of the plates have been chiseled from their frames. Carved in the ancient script above the bronze doors are the words, "Grimthorn Public Museum of Art". Even if passerby could read the old letters, it wouldn't change the name currently used for the building. The museum is a confusing maze with poorly lit galleries, filled from floor to ceiling with smoke darkened paintings, staring out from the veils of time. Marble and bronze sculptures congregate in haphazard queues, pushed aside to make room for the gallery's listless custodians and their semi-annual rounds. The museum is guarded, but the guards are poor and turn their attentions elsewhere for a crossed palm.

Entombed beneath the Grave lies a great iron door emblazoned with five skulls, piled one atop the next. That's what historians claim. The actual vault of Grave-Send has never been found. There are many theories of where the vault might be hidden, the most popular being beneath Kanēvar's Tower. The Legend of Kāalva holds that her son placed Grave-Send into the vault for safekeeping, until it was again needed in the defense of Grimthorn.