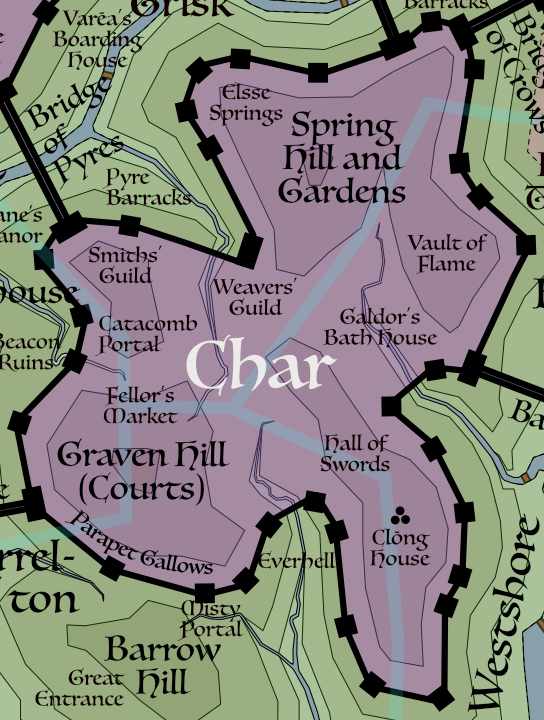 The Char is named for Kāalva's sword, the Finger of Flame. The District rises from the center of Grimthorn, its heavy stone walls looming 100 feet above the surrounding Footholds. From its parapets, one can look down upon the snaking Aralis River and sail-choked Lake Dēalled to the south. Its walls are broken with square towers and gatehouses opening to five of Grimthorn's great bridges: Burning Bridge (to Grimthorn), Bridge of Crows (to Heart), Bardsfall (to Grave), Rivers' Gate (to Soul), and the Bridge of Pyres (to Final).

One of the largest buildings in the Char, Fellor's Market is a five story marketplace with central staircases and freight elevators powered by beasts in a basement stable. Notable throughout the District for its red slate shingled roof, the market was once covered in elaborate murals that were refreshed for every Spring celebration. The murals are now faded and most stories are unoccupied. Merchants still man tables, kiosks, and stores within the lower building, but most offer high-end products, taking advantage of the King Hessen's unrivaled security.

A popular destination for private deals and meetings, Galdor's Bath House is as much a fixture of the Char as the Spring Hill and Gardens. The exterior appears as an unremarkable block of buildings and houses occupying two city blocks. Inside, the Bath House contains a seemingly endless array of white-tiled halls and chambered pools. Teams of whispering children and small-folk work endlessly at scrubbing and polishing millions of tiles, laundering and folding soft towels, and stoking the subterranean fires of the hypocausts. A great many services are offered though none are posted. All fees are specific to individual Bath House servants and are negotiable.

The Courts of Grimthorn were once held upon the ancient Graven Hill. The location was likely chosen for this purpose by the antecedents of the city's founders, as runes discovered upon and within the rocky mount have been dated to the region's bronze age. Historians claim that the mysterious markings detail an extensive legal system of laws and punishments. The most notorious feature of Graven Hill are five giant stones, known interchangeably over the years as the Pentarchs, Hand of Kāalva, and the Hand of Doom. After some examination, it was found that the menhirs are each expertly balanced in wedge-shaped notches with a stone axle at their base. A doomed prisoner was strapped by his ankles, wrists, and neck to rings set at the top of each stone. With little effort, initiated by five men, the stones would tilt outward, pulling with them each of the restraints. With similar effort, the well-balanced stones could be pivoted back into place.

Today, most justice meted out by King Hessen V and his judges, is performed along the nearby Parapet Gallows

A place of reflection, the Hall of Swords is a large stone edifice with tall narrow windows that allow slashes of light into high, dark, and dusty chambers. The walls are covered with broken weapons of duels and battles, each representing one or more deaths on some nameless battlefield. Some visitors see these as testimonies to forgotten champions, others as evidence of war's futility. Whatever a visitor's interpretation, the towering chambers with their crowded walls reaching into high shadows, ordered along a relentless path of one-way doors, are sobering, inspirational, and unforgettable.

Constructed of black granite blocks to resemble the begrimed stones of a blacksmith's forge, the Smiths' Guild is a hulking structure near the Bridge of Pyres gatehouse. The interior is a collection of smoking and gaming rooms appointed with fine wood paneling, ponderous fireplaces, and the occasional iron statue memorializing esteemed Guild brothers. The top floor contains a large meeting room with a long central dais surrounded by several tiers of seats. The Smiths' Meeting Room is considered one of the best such chambers in the city outside of the Arcanum and Academy Hill. The basement of Smiths' Guild used to boast one of the largest private taverns in the Char, called Brakar's Last Stand.

Once a lush public park of life-like forests, meadows, streams, and springs, the Spring Hill and Gardens attraction was renowned throughout the Iron Sea region. For untold generations, the city's rulers and affluent would expand the park's allure, and their own reputations for wealth and generosity as well. Innumerable paintings were composed along the wandering pathways, idyllic grottos, and now ironic marble ruins.

The most fantastic attraction of the gardens is Elsse Springs, a horseshoe of natural stone walls over which streams trickle and fall from above into a tranquil pool. The walls are covered with moss and flowers, and the pool is alive with colored fish and floating plants. The area was designed so masterfully that the dryad Elsse traveled to Grimthorn to take up residence at the imitation springs. When enough admirers gathered at the springs she would emerge and sing hauntingly for those gathered.

Entombed beneath the Char lies a great iron door emblazoned with a burning sword. A number of people claim to have found the great vault door, but its location is a well-guarded secret. The Legend of Kāalva holds that her son placed the Finger of Flame into the vault for safekeeping, until it was again needed in the defense of Grimthorn.

At the District center is a large street-level textile and rug marketplace, arranged among the pillars of the Weavers' Guild house. The market is still a popular destination for tailors and household seamstresses alike. Toward the market's center, giant looms extend up into the heart of the building, worked by teams of masters working in concert on great tapestries, rugs, and sheets of beautiful cloth. The Guild house above is no less busy, offices ring with the loud voices of merchant sellers and buyers from foreign shores. Even the library is congested with students drawing down great centuries old folios of patterns, weaves, and textiles. Despite the general bedlam, the Guild house falls silent and empty each day after the evening bell. Non-Guilders who have not vacated the building by that time are chased from the Guild house with long wooden canes.