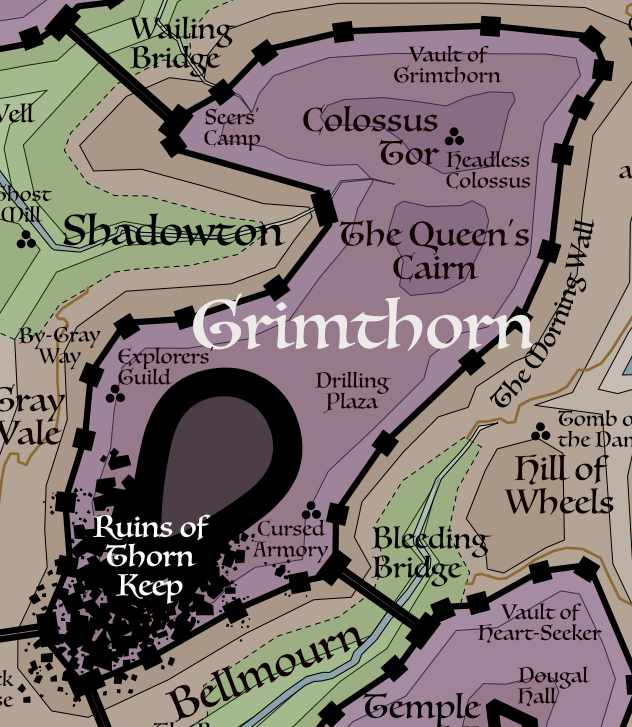 The Grimthorn District is named for Kāalva's sword and namesake of the eternal city, Grimthorn. The oldest and highest of the eight districts, Grimthorn's fortified walls rise nearly 130 feet above the hilly slopes on which it sits. The great walls encompass Thorn Hill, The Queen's Cairn, and Colossus Tor.

The center-most district encircles the base of the great, crumbled Thorn Tower, historic base for the Order of the Swordweavers. The tower walls are riddled with holes and collapses where cityfolk have passed through for generations, stealing stone and treasures from the ancient ruin with which to build buildings, fortifications, and fortunes. The District has no official population, for few stay within its walls at night. The ruined walls themselves are covered with Order runes to keep the night-bound Corruptions within.

Unlike other Footholds in the city, the Footholds of Grimthorn hold regular mayoral elections to decide who will govern over them. Over the years, many Pentarchs have seen this as a vacuum of power and sought to exert control over these communities to extend their influence and revenues. These power grabs traditionally unite the other city rulers against them, as the Footholds of Grimthorn owe ultimate allegiance to Kāalva, and no other. With the addition of new blood, i.e., Alzaril Dār, the threat to these Footholds may be growing again.

The Grimthorn is connected by four bridges: Bleeding Bridge (to Heart), Burning Bridge (to Char), Tower Bridge (to Final), and the Wailing Bridge (to Wail). Unlike other Districts, these bridges are the only means to access the District. There are no other entrances or tunnels from the Footholds.

These ruins were once an impressive stone barracks and storehouse for the Army of Grimthorn. Explorers crawling through the collapsed pile can still find broken swords, shields, and armor pieces pinned beneath tons of stone. Some have claimed to find intact chambers deep within the debris, filled with priceless military wares. These stories are unlikely to be true. Even when the armory was standing, it only served common soldiers, so any "treasures" found within would not be extraordinary.

Digging deep into the Cursed Armory is also complicated by the Corruptors, ghostly inhabitants of Grimthorn District intent on protecting its secrets. The Corruptors are believed capable of possessing stolen objects, and tormenting their owners until the objects are returned.

The Grimthorn marching grounds extend between the Ruins of Thorn Keep and the monumental mound of Queen's Cairn. For the most part, the drilling plaza is much the same as it has been for centuries. The ground is covered in a massive grid of relief carved tiles depicting military prowess, battles, campaigns, and wars without name. Though most of the carvings are worn and the painting faded, each memorial square is a window into the Grimthorn's great and largely forgotten past.

A stone and timber lodge stands near the foundations of the Thorn Keep ruins. Despite its apparent age and wear, the building is much younger than the ruins that surround it. Built in the style of a royal hunting lodge, the building's central dome is supported by mammoth tusks and shingled with volcanic tiles. The chimneys of dozens of great fireplaces break through the many pitched roofs, shingled and thatched interchangeably to give the appearance of a surrounding close-knit village. The great doors to the guild house are carved from exotic wood from far-flung forests, with the images of extinct beasts and mythical monsters. Inside, the floors and walls are covered with hides, trophies, treasures, and statues from faraway lands--lands that may no longer exist.

The Explorer's Guild is an exclusive fraternity where the wealthy and influential gather to smoke, drink, carouse, and talk about the events of world. Explorers and adventurers returning from great quests are often invited to speak at the Guild, share their experiences, and bathe in the approbation of the city's Select. No matter how successful adventurers may be, membership is reserved for nobility and their peers.

Laying upon this tor lay the pieces of a great bronze statue of Kāalva Swordweaver. Here and there her eight arms and their shattered swords can be found where they fell when the colossus collapsed. Alarmingly, all the statue's pieces are accounted for except the head. The head lies on a distant hillside outside the city, as if it was knocked from her metal body with a giant club.

Many that visit the District, ascend the great rocky mound and climb through the hollow trunks of her arms and fingers. A large stone plinth, where the statue's feet are still firmly mounted, is a popular destination for sight seers and picnickers. The place is generally safe, provided visitors return through the bridge gatehouses by sunset.

The Morning Wall is so named because it is the first location in the city that is touched by the morning's light. Before The Fissure, priests and dreamers would congregate upon the wall each day and welcome the rising sun. Today, the wall has different connotations. The Morning Wall is now a destination for those that spend the night within the District, and wish to find refuge from the Corruptors.

Believed to be the final resting place of Queen Kāalva, the great megalithic cairn is a prehistoric oddity enclosed as it is by the masterful stoneworks of the Fortified District. Taking or climbing upon the stones is forbidden. Each stone of the cairn is considered sacrosanct, and the removal of any part of the memorial is believed to bring upon the thief all the wrath that the Corruptors can bear.

The predominant landmark of the entire City of Grimthorn, is a shadow of its former glory. Thorn Keep, believed to have been built by the Red King upon the earlier foundations of Queen Kāalva's Keep, was once visible across the Isle of Īll and well out into the Iron Sea. Estimates of its original height vary, but the volume of tumbled stone is indisputable. The Keep once rose in a soaring arc resembling a giant thorn rising above the Bay of Swords. After the Dissolution of the Crown, Thorn Keep was abandoned for a time until the Order of the Swordweavers, a holy fraternity devoted to the worship of Kāalva and the research and teaching of martial art, adopted and sanctified the tower as their own.

When the Order was dispersed in the 70th century, Thorn Keep was again untenanted and began falling into disrepair. The most notable event in this decline was the collapse of the high belfry in 7032 AR. After an earthquake that shook all of Īll, the topmost point of the keep collapsed and the giant Bell dropped to earth with thousands of tons of falling blocks. The Bell came to rest in the Foothold now known as Bellmourn. The bell itself came to rest upside-down in a great declivity, where it is now called the Bronze Bowl. Religious baptisms and other ceremonies were held at the Bronze Bowl up until the The Fissure.

The tower collapsed to the southwest because the belly of the thorn curved in that direction. The Sigil of Thorn Tower is a crude rendition of its original shape. The point of the original tower was more directly over the thorn's swell. The ruins lay at the feet of the tower, mixed in with the collapsed District fortifications, and scattered across the slopes leading down into the Foothold of Trisk.

What appears to be a motley nomadic campsite is actually the only permanent community in the District. Located at the northwest corner of Grimthorn, near the Wailing Bridge gatehouse, is a sprawling encampment of multi-colored tents and shelters surrounding a series of campfires and elaborate wooden structures resplendent with wind chimes and prayer pennants. The camp was established shortly after the first Dark Night of 7206 AR. Mystics and forsaken holy adepts began converging at this place, in the hopes of finding the last sanctuary in a collapsing world. Among the residents of this perennial camp are retired priests, monks, and hierophants of different faiths, from lands far flung and possibly lost to the inexorable Rewriting.

Entombed beneath the Grimthorn lies a great iron door emblazoned with a curved sword surrounded by seven others. The exact location of the vault door is unknown, but many believe it either lies beneath the Queen's Cairn or Colossus Tor. The Legend of Kāalva holds that her son placed the Grimthorn into the vault for safekeeping, until it was again needed in defense of Grimthorn.