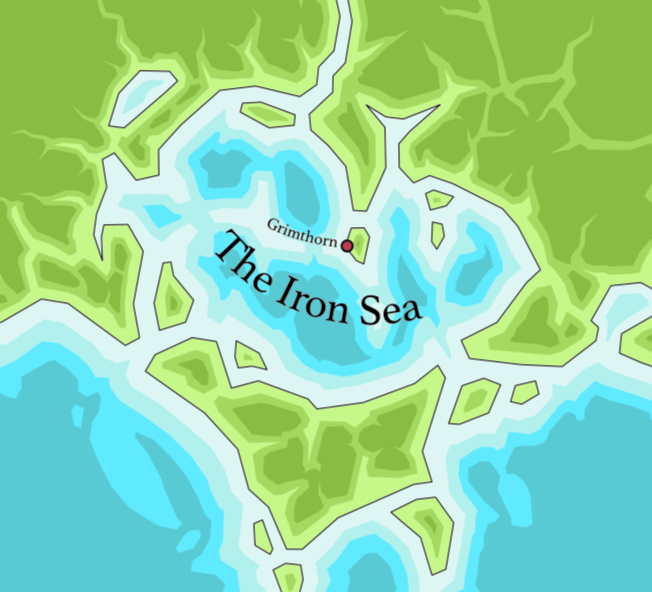 The World of Grimthorn is a world undergoing unnatural changes. Since The Fissure, the world's people, places, and history have been undergoing a series of transitions that have inexplicably been rewriting the planet and its inhabitants. Nations, empires, and gods have been erased.

The only location that seems immune from these transformations is the Island of Īll and its most notable district, the eternal City of Grimthorn. For reasons unexplained and perhaps better unexplored, the City of the Eight Swords, remains a sanctuary against the alien reformation occurring in all other corners of the world.

For most people living in and around the City of Grimthorn, the Iron Sea represents a border between the known and the unexplored. Though it seems wide and forbidding, the Iron Sea is actually a small inner sea surrounded by lands which once supported bountiful trade between many kingdoms. As civilization erodes the sea has once more become a source of foreboding, daring mariners to embark across its terrible depths.

South across the Iron Sea lies the Island of Thāvis, for ages the garden of Grimthorn. Thāvis' picturesque rolling green hills and patchwork meadows stitched together with rock pile walls, has long attracted the attention of tyrants with plans to control the agrarian treasure. Few however, have managed to unfasten the hold of Grimthorn. Not only does Thāvis provide produce for the eternal City, its young men gladly serve in its military with hopes of escaping the endless cycle of farming or returning home with gold and having the pick of any plump maiden the island might offer.

Developments throughout the Iron Sea have made shipping to Grimthorn difficult. Ships wishing to take their cargo to Grimthorn must now take the ancient routes of following coastlines, a strategy with its own inherent risks.